I did it, at last. I got rid of the damn thing. I thought it would cause me anguish and pain, instant regret welling up in my chest when I pushed the ‘delete’ button on my account. But it didn’t.

I have a life. I am a sentient, independent, intelligent life form who can adapt to not being attached to that little chatterbox with all its distractions, its invasive tracking of my life and its illusion of security. I should have done it years ago.

Back in the 1990s, I developed one of the first-ever microwave-protection devices for cellphones, just as they were morphing from analogue monsters to ultimately become the sneaky digital Trojan horses they are now. Even back then, people knew they were not safe and that the technology was potentially carcinogenic. I found that out as I was developing my protective product that incorporated some stealth and other fancy technology to scramble microwaves and render them harmless. The idea for the product first emerged when my business partner, who had been in the military, working on Tornado fighters, explained the devastating effects of the microwaves they employed in their industry and was shocked to discover that the same technology was now being employed in devices that people held right next to their heads.

The military knew. The people at Porton Down (the UK government military science park) knew, and I was told that people there would not use a cellphone. The National Radiological Protection Board—the body tasked since 1974 with protecting the public against non-ionizing radiation—knew. Of course, they knew; their very existence was confirmation that they knew. The phone industry itself knew. My business partner met a Vodaphone director who clearly knew. Privately, he admired our product, but told my partner that, publicly, he would rubbish it. A patent search revealed that all of the major cellphone manufacturers at that time had registered patents for devices designed to protect their customers from their own devices.

Motorola had even conveniently attached an IEEE report they had commissioned, clearly detailing the problems emanating from their famous ‘brick’ phone. The UK government knew, but they were in cahoots with the industry and the NRPB to roll out this huge money-maker, whatever the consequences.

What the government didn’t know was how to verify the safety of these devices. They did have ‘standards’ and ‘tests’ that cellphones were subject to, which were completely farcical. We did the government-approved tests to demonstrate the effectiveness of our product. These early tests were designed for hairdryers and essentially measured heat, which is the least of any cellphone user’s concerns. I remember setting up the phone in the test centre’s anechoic chamber, only to find that the test was useless because, in an anechoic chamber, the phone cannot get a signal. Go figure.

But, most importantly of all, people knew, because many were being affected. In the early days of our product, I remember getting enthusiastic responses from telephone engineers, for instance, who feared they could no longer work because of the headaches and other effects they were experiencing. They didn’t need any science, proof or convincing. Those affected have their own evidence in their bodies, which even the cleverest scientist or industrialist cannot deny.

What took me so long?

You’d think that, given my background knowledge, I would never want to own a cellphone. However, such is the seductive power of these devices that I succumbed—willingly, even enthusiastically. As time went on, it seemed like a natural and important part of my life—even my identity. I was in business, and it was cool and useful to have a cellphone. And then it increasingly became necessary.

Can you see how we have been played? Can you see how deep this conditioning goes? After ten years, cellphones became essential for living, gradually eliminating landlines and everything else that could be incorporated into the one device, supplanting them all. So convenient! Now, we have a whole new generation for whom cellphones are part of their DNA, or so it seems—the very same DNA that is being irreparably changed through cellphone use.

I am not aware of any adverse effects, but anyone who looks into the technology with an open mind (that’s the challenge!) will discover that there are some instant and many cumulative health effects that can take years to become evident but may also be masked by other conditions, while contributing to them. We all have different sensitivities. As with smoking and cancer, some people are acutely affected and some apparently aren’t affected at all… until they are.

The cellphone seduction continued to grow, seeping into government and industry requirements for security, jobs, the financial system and more. And I was carried along with it. Now, with the 5G rollout, we can see a bigger plan, with insidious tracking, monitoring, data-gathering and the shocking increase in corporate and government surveillance and control over people’s lives.

What did it take for me to change my mind?

I can remember the moment, as clearly as if it was yesterday, when my beloved Olga was wheeled out of sight into the operating theatre to have a piece of her scalp sawn off so that the surgeon could remove a tumour—a schwannoma—that had grown on her auditory nerve and threatened to kill her. I didn’t know if I would see her again, or in what state she would be after eight hours of brain surgery. Acoustic neuromas, which used to be virtually unheard of, are just one example of the many conditions that have become increasingly common, in tandem with cellphone use. They are known to be caused by this technology. Olga’s was, not surprisingly, on the side where she occasionally used her cellphone or cordless phone.

Incredibly, I kept my phone for another eight years. I told myself I needed to be in touch, to protect her, to be instantly available, to make my business flow better so I could make more money to keep us safe, and so on. What if I crashed the car and couldn’t phone her? What if I was running late and couldn’t let her know not to put my dinner on? What if I couldn’t decide which brand of flour to buy at the supermarket? I could go on. I don’t think I need to convince anyone who reads this that a cellphone is essential. But it isn’t.

When I was in my teens, I used to regularly hitchhike around the UK or Europe. Maybe the world was a safer place back then, but not necessarily. Before cellphones, did any of us have any concerns about our safety or ability to keep in touch or find everything we wanted instantaneously? Life went on, we all managed perfectly well, and if there was a crisis, we had ways of dealing with it. We were more present to the risks we took and made decisions based on personal choice, without governments or corporations telling us how to behave, what to buy, how to make ourselves acceptable and more.

We practised a more robust form of self-responsibility. We communicated better with others. There was more tolerance and a greater sense of community. Maybe we had a stronger sense of self that was not so readily shaped and manipulated by corporate interests and virtual relationships with often suspect and rarely verifiable provenance. Somehow, I feel we were more complete human beings before we relinquished so much responsibility to devices that made everything instant and convenient—but not necessarily better.

The world that has emerged leaves little room for personal freedom to think for ourselves and discover our own way. Many will disagree, but this world of pre-packaged experience is all they have ever known. Now, as with the ‘boiling frog’ syndrome, we are accepting more and more restrictions on personal freedoms—even welcoming them—as the extraordinary potential and spirit within every human being is being hijacked.

​If you can't remember a time when you didn't have ​a cellphone, here​ are ​​10 ​reminders.

The majority of people still don’t believe wireless technology is harmful. Even the majority of those who do understand the health and other implications, still financially support the industry through their cellphone use. Others provide supposedly protective devices and materials for those who feel the effects. But these are only Band-Aids. They are not solutions. In fact, such measures support the continued existence of the wireless industry, while cellphone customers remain imprisoned by something they believe will protect them, even though their rights and freedoms are being progressively eroded.

I could beat myself up for the way I continued to use a cellphone in the face of the very real danger to Olga’s life, knowing it was surely affecting me as well, albeit over the long term. But that doesn’t help now and I think that anyone who feels drawn to give up their phone should do it with a happy heart, without any guilt or bad feelings.

Now that I have ditched the cellphone, I feel strangely liberated. The prospect of letting it go was far worse than the actual event. I have regained something valuable. What that may be, time will tell, but it feels good.

My work hasn’t suffered because I simply use a computer that is hardwired, just like we all used to before the advent of WiFi, so all of the technology is still available to me, but in a healthy way. In fact, the benefits of not having a cellphone far outweigh the alternative. ​I have more focus, a better work/life balance and more.

Now, I can go to a café, knowing that only the people who are physically there with me know that I am there, and that no one is gathering data on me (as long as I use cash!), that I am not being prompted to go to a nearby shop that ‘may interest me’, that my movements and actions are not generating targeted ads on social media, a trace on Google, or anything else that will be used to further commoditize or contain me.

My time is my own. My space is my own. I can manage my privacy. I can make my own choices. I can be human again… and fancy-free.

​With humour, insights and discoveries from the forefront of modern science, ​Olga Sheean tells a profoundly personal story​ about the effects of wireless technology on her, why governments are hiding the facts, and our capacity to transform our personal and planetary health.

​This is the definitive, essential reference work for anyone who has concerns or doubts, or who is in a position of responsibility and needs to know the real implications of the 5G rollout.

​A new organization has ​been formed​: End Cellphones Here on Earth (ECHOEarth), whose members do not own cell phones and whose mission is to end the root cause of the wireless web that is punching holes in our atmosphere and bathing us all in radiation.
ECHOEarth has set the solstice, June 20-21, 2020, as Cancel-Your-Cell-Phone-Account Day, the day we invite you to get off this train and change direction. To sign up and get a free cellphone information download, click below. 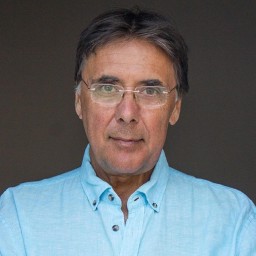 Kids at the café